PITTSBURGH — Brandon Crawford entrenched himself in the Giants’ extensive slugging lore, while Madison Bumgarner reaffirmed his budding stardom. Together, they propelled San Francisco farther into the postseason by collaborating on Wednesday night’s 8-0 victory over the Pittsburgh Pirates in the National League Wild Card Game.

Crawford delivered a fourth-inning grand slam that stunned Pirates starter Edinson Volquez and a PNC Park throng. By contrast, nothing fazed Bumgarner, who silenced the Pirates with a four-hit complete game.

The Giants are proving that they simply don’t lose showdown games such as this one. As Casey Stengel said, you can look it up. They not only captured their eighth consecutive postseason game, but they also lengthened their winning streak in elimination games to seven.

San Francisco advanced to a Division Series matchup against the Washington Nationals beginning Friday in the nation’s capital. Under the series’ best-of-five format, the Giants are guaranteed at least one home date at AT&T Park — Game 3 on Monday.

The Giants’ immediate future appeared vague until the fourth inning, when they loaded the bases with nobody out on singles by Pablo Sandoval and Hunter Pence and a walk to Brandon Belt. A pivotal event in that sequence was a close 2-2 pitch that Volquez threw to Belt, who took the borderline delivery for ball three.

Up came Crawford, who lofted Volquez’s 1-2 pitch into the right-field stands. Crawford’s first postseason homer placed him in the pantheon of Giants who have hit memorable postseason grand slams, including Chuck Hiller, who hit the first World Series slam in NL history in 1962; Will Clark, who rocked the Cubs’ Greg Maddux in the opener of the 1989 NL Championship Series; and Buster Posey, whose big hit hastened the Giants’ triumph in the clincher of the 2012 Division Series at Cincinnati.

Belt drove in three runs with an RBI single in the sixth inning and a two-run single in the seventh. He and Crawford had plenty of help, as Joe Panik went 3-for-5 and Posey added two hits, including an eighth-inning RBI single.

The rest was up to Bumgarner, who displayed the form that enabled him to compile an 18-10 record this season. The left-hander maintained his characteristic precision, issuing only one walk while striking out 10. He threw 109 pitches, including 79 for strikes. Pittsburgh, which ranked fourth in the league in scoring, moved only three runners into scoring position against Bumgarner, who improved his postseason record to 4-2.

Chris Haft is a reporter for MLB.com. Read his blog, Haft-Baked Ideas, and follow him on Twitter at @sfgiantsbeat. This story was not subject to the approval of Major League Baseball or its clubs. 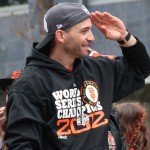 A Fond Farewell to Marco Scutaro 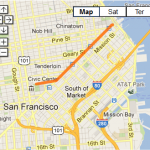